Steeped in history, the City is the only remaining completely walled city in Ireland and one of the finest Walled Cities in Europe. The Walls were built during from 1613-1618 by the honorable, the Irish Society as a defense from England and Scotland. They are approximately 1.5km in circumference and form a beautiful walkway around the inner city overlooking wonderful local attractions including the Bogside and Fountain areas of the city. 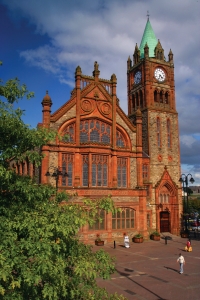 The Guildhall is one of Derry’s most recognisable landmarks and has been at the heart of city life since 1890.This beautiful building is well worth taking time to see, located just a short drive from the hotel in the heart of the city, just outside the city walls.
Fashioned in neo-gothic style, the Guildhall is one of the most striking buildings in the North. It contains stunning examples of stained glass windows and visitors will be intrigued by its unique history and appeal.
In 2013 following major restoration of the Guildhall reopened to the public and whilst retaining its civic function it now also boasts a new multifaceted tourism experience providing a central hub for visitors exploring the city. 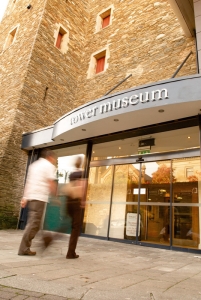 The award winning Tower Museum is a must visit when you come to Derry – Londonderry! Located only 10 minutes away from the hotel Museum is situated within the city’s historic walls at Union Hall Place.

Visitors can enjoy exhibitions that include The Story of Derry and the An Armada Shipwreck – La Trinidad Valencera . At various times throughout the year the museum also plays host to a range of other temporary exhibitions. A interesting and fun museum, the Tower Museum is well known for having exhibitions that use display and interactive techniques to present their stories. 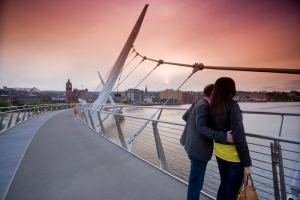 The Peace Bridge is an iconic symbol of the City. Located just 10 minutes from the hotel, visitors to the City can  enjoy a cycle and walk accross the bridge and get some great photograph opportunities of the River Foyle and City.

It opened in 2011, connecting Ebrington Square with the rest of the city centre.  The bridge was funded jointly by the Department for Social Development (NI), the Department of the Environment, Community and Local Government with the intention  of improving relations between the largely unionist ‘Waterside’ with the largely nationalist ‘Cityside, by improving access between these areas. 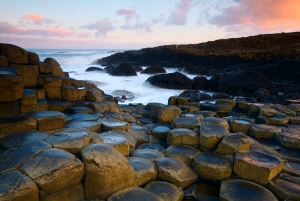 Often described as the Eighth Wonder of the World, the Giant’s Causeway is located along the scenic Casueway Costal Route, approximately 40 miles from the hotel, in Derry.
The Giant’s Causeway is renowned for its polygonal columns of layered basalt and is steeped in myth and legend that intrigues both adults and children a like. According to legend, the columns are the remains of a causeway built by the Irish giant Fionn mac Cumhaill (Finn MacCool) who was challenged to a fight by the Scottish giant Benandonner. Fionn accepted the challenge and built the causeway across the North Channel so that the two giants could meet!!
When visiting the Giant’s Causeway guests can enjoy the interactive exhibition in the state of the art Visitor Experience Centre before heading out to the stones to identify the distinctive formations and enjoy a stroll by the coast. Once you have visited, you will quickly see why it has become Ireland’s top tourist attraction!!

For more information on the Giant’s Causeway please visit www.causewaycoastandglens.com/Giants-Causeway 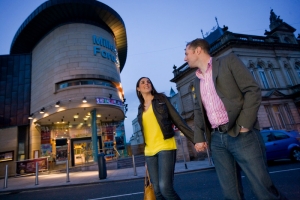 Located in the centre of the city just 10 minutes from the hotel, the Millennium Forum was built inside the walled area on Newmarket Street, opened in 2001. The first purpose built theatre in the city it has seating for 1000 and has the largest theatre stage in Ireland.

The Millennium Forum offers a challenging and vibrant programme of events from drama to dance, comedy to musicals and light entertainment to children’s shows. Opening Hours: Mon – Sat 9.30 to 5.30pm Box Office will open one hour prior to evening performances. Admission charges will apply to performances held at the venue.

For further information on events at the Millennium Forum please visit www.millenniumforum.co.uk 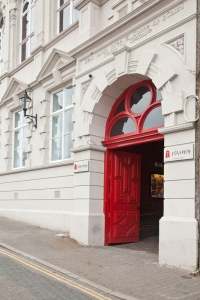 The Award Winning The Playhouse is based in Artillery Street, Derry and was established by Pauline Ross in 1992 with a grant of just £300. Since then it has grown to become one of Ireland’s leading Award Winning multi-disciplinary Community Art Resource Centres based on a neutral site with the city centre. It is a self-help, grass roots, bottom-up community development project which is people centre with charitable status.
The Playhouse comprises of a 175 Seat Theatre, an extensive Education and Outreach Department, a Dance Studio, a gallery and is home to several cultural/art based groups and tenants. The Playhouse filled (and continues to fill) a large gap in the provision of the arts in the North West. It also is one of only a handful of venues commissioning, producing and touring theatre in the island of Ireland.
Whatever your needs, The Playhouse can provide you with a professional, efficient service for your event. For more details, please contact us on 028 7126 8027 or email us on: info@derryplayhouse.co.uk 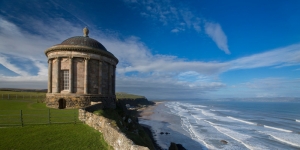 One of the most iconic locations, Downhill Beach is an 11km stretch of sand and surf located on the Causeway Coast. This magnificent location is home to Mussenden – a tiny temple perched dramatically on a 120ft cliff top, high above the Atlantic Ocean.
Featured Scene
Downhill was illuminated and transformed into Dragonstone in Season 2. This is the spot where the old gods burn on the beach, where Stannis pulls the flaming sword and Melisandre chants: “For the night is dark and full of terrors”. 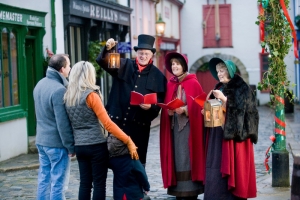 Located 30 miles from the Derry, the Ulster American Folk Park tells the world famous story of Irish emigration at a museum that brings every detail of it to life. The guest can follow the life of the Irish emigrant from the thatched cottages of Ulster, to the emigrant sailing ship leading then to the log cabins of the American Frontier. The Folk Park is an interactive and interesting look at history where you meet various costumed characters who have tales to tell and food to share. 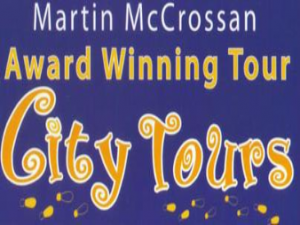 City Tours is a company with a difference. Based in the heart of the historic city of Derry, this innovative tourism venture, owned by local man Martin McCrossan, puts choice, quality and service at the centre of its activities.
The tour has been described by many as possibly the Best Value Walking Tour on the Island of Ireland.
With over fifty natural and built attractions in the region, such as Derry’s Walls, The Bogside, The Peoples Gallery (Murals) The Bloody Sunday Story, The History of the Apprentice Boys, The Marching Season Traditions. The walking tour has been listed by many as one of the best experiences they have had on their travels anywhere.

Explore North West Ireland`s heather clad hills, scenic glens and beautiful sandy beaches accompanied by a local ecologist who has an exceptional knowledge of this region`s unique landscapes, habitats and prehistoric sites. As a guide he specialises in leading curious visitors on walking tours that are not too physically challenging but definitely informative and enjoyable.

Starts with a morning walk through the magnificent volcanic scenery of the Giant`s Causeway, Ireland`s only natural science World Heritage Site. Following our visit to the Causeway we will explore a number of North Antrim`s other scenic highlights and also discover many examples of this coastline`s diverse and colourful plant life.

A driving and walking tour of Donegal`s amazing Derryveigh Mountains, we start with a visit to the north of Ireland`s only National Park – Glenveigh. The ancient rocks of this area form the exceptionally scenic Errigal and Muckish Mountains both mountains are well worth a visit. Apart from the scenery walking in Derryveigh is rewarded by learning about this area`s many unique plants these include several attractive and interesting artic/alpine plants.

A day of touring and walking about the wonderful Inishowen Peninsula, to reach Malin Head Ireland`s most northern headland. On the way to Malin Head we will explore the landscapes and bays of Inishowen that have a fascinating geological history that stretches back hundreds of millions of years. On our journey we will see many interesting plant species that spread to the peninsula long before humans arrived.  Inishowen is exceptionally rich in archaeological heritage, a heritage that that we will also examine as we travel.

A day exploring the Sperrin uplands an area that contains numerous unique landscape features that where created at the close of the last glaciation. We will also explore a number of the best Bronze and Iron Age archaeological structures that are scattered throughout the region. On our walks through this picturesque region you will also learn about upland habitats that contain many unusual specialist plants even some that have evolved insectivorous and parasitic survival techniques.

This website uses cookies to improve your experience. We'll assume you're ok with this, but you can opt-out if you wish.Accept Read More